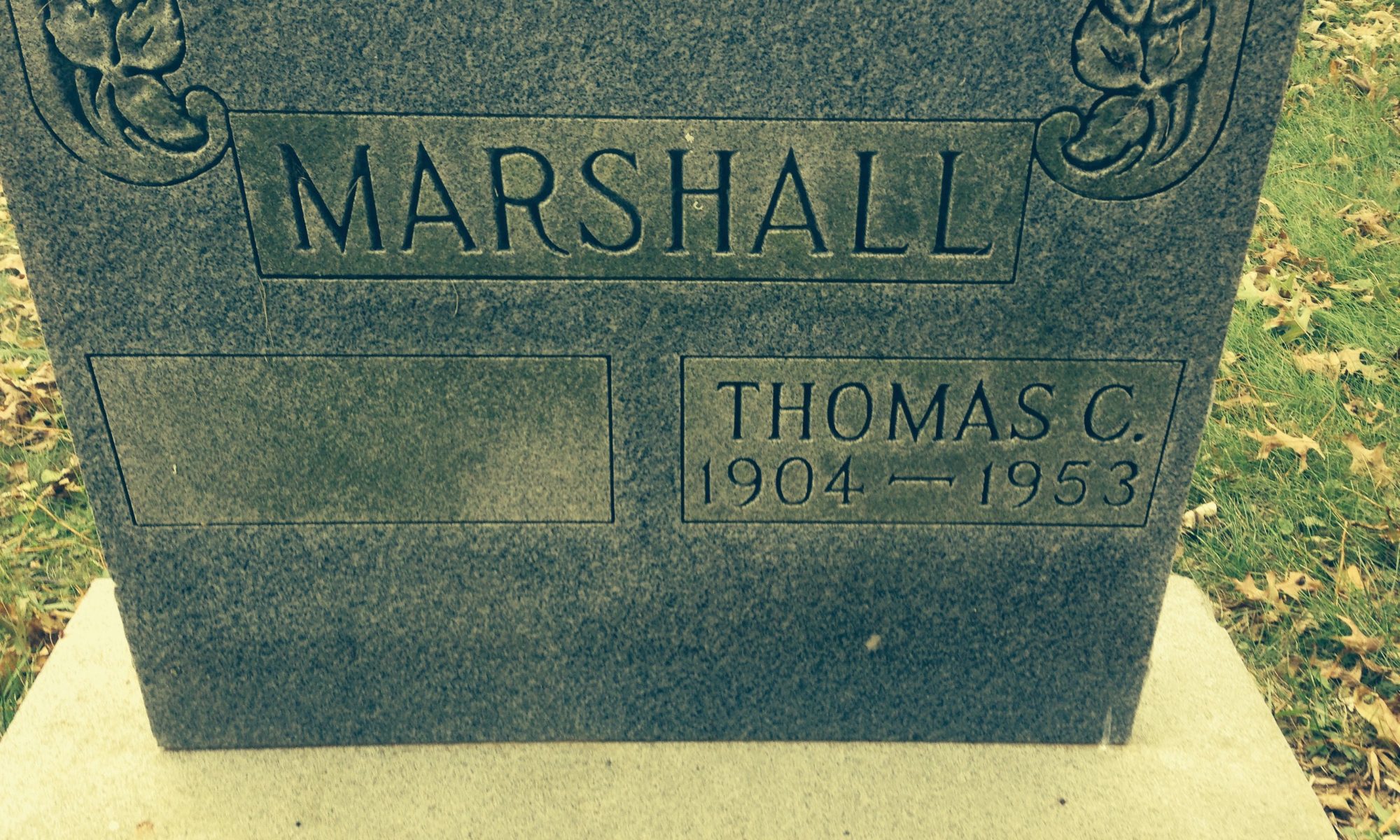 Thomas C. Marshall was born after Paxton published the Marshall Family
so there is no information from that source

Some of the information comes from Ancestery.com

His mother Orra Moore passed away in 1930 in Maysville, Kentucky, at the age of 56.

His father Benjamin Harbeson Marshall passed away on January 5, 1937, at the age of 75.

Cause of death recorded as Acute Alcoholism

I, Charles W Marshall, am writing this portion of this entry on Mar 2 2019. It contains the oral history I have heard growing up on Walnut Grove Farm. You should understand it may not be accurate. I hope others will review and make entries that correct, extend and clarify the life of Thomas Calvert Marshall He died before my fifth birthday and while i have heard about him, all our life, I have no memory of ever meeting him in person.

When prohibition occurred Tom started finding illegal boze cache’s hidden in certain corn shocks in fields along Key Pike. He realized that bootleggers where selling booze to multiple customers and using a corn shock, as the pick up point. Once the bootlegger was paid he would tell the customer, something like “When going away from Washington, your booze is in the first corn field, on the right side of Key Pike and is in the third shock on the second row,”

It seems Tom and Ben watched people coming in cars to place the booze and then after dark each evening other cars coming. Someone would get out walk directly to a shock, pick up their booze and leave immediately. Everyone in the area was fearful of taking the booze, as the local bootleggers were reputed to use physical violence when crossed.

One Saturday afternoon (Tom and maybe Ben) moved all the booze caches around after the bootlegger left. None of the shocks that started with a cache ended up with one. The next morning almost every shock in the field had been destroyed as the “customers” tried to find their booze. Ben Sr. made Tom and Ben Jr immediately re-shock all the scattered corn. After that Tom and Ben did not even touched any of the booze caches.

Tom graduated from the University of Kentucky with a degree in Mechanical Engineering. Upon Graduation he went to work for Ford, Bacon & Davis engineering. He career focused on building petroleum pipelines. One of these was the “Big Inch” that ran all the way from Texas to the North East. During much of this period he would live in camps that followed the construction of the pipeline. These camps moved frequently and where often literally in the middle of nowhere, as they located based on “end of pipe line” and nothing else. Charles Jr (my father) said that Tom worked hard during the day and at night he and his fellows passed their time with drink, for lack of other entertainment.

Tom sadly demonstrated the Marshall inability to drink in moderation. At some point , in the late 40’s, he could no longer find employment building petroleum pipelines, due to his drinking issues.

By this time he was married. He returned back to Mason County. Charles Sr was able to get him a job as the Mason County Road Maintenance supervisor. After only a few years, he lost that job due his alcoholism.

Nancy sold the 1/4 share of Walnut Grove, that she inherited on Tom’s death, to Charles Jr. She also sold her house in Washington KY bought a trailer. Charles Jr. drove her car as they pulled her trailer to AZ, and then he returned back, via train. Nancy later remarried and relocated to the Tampa area of FL

This is extremely brief recap of Thomas Marshall’s life. I hope others can flesh out a more accurate telling of his time on earth.