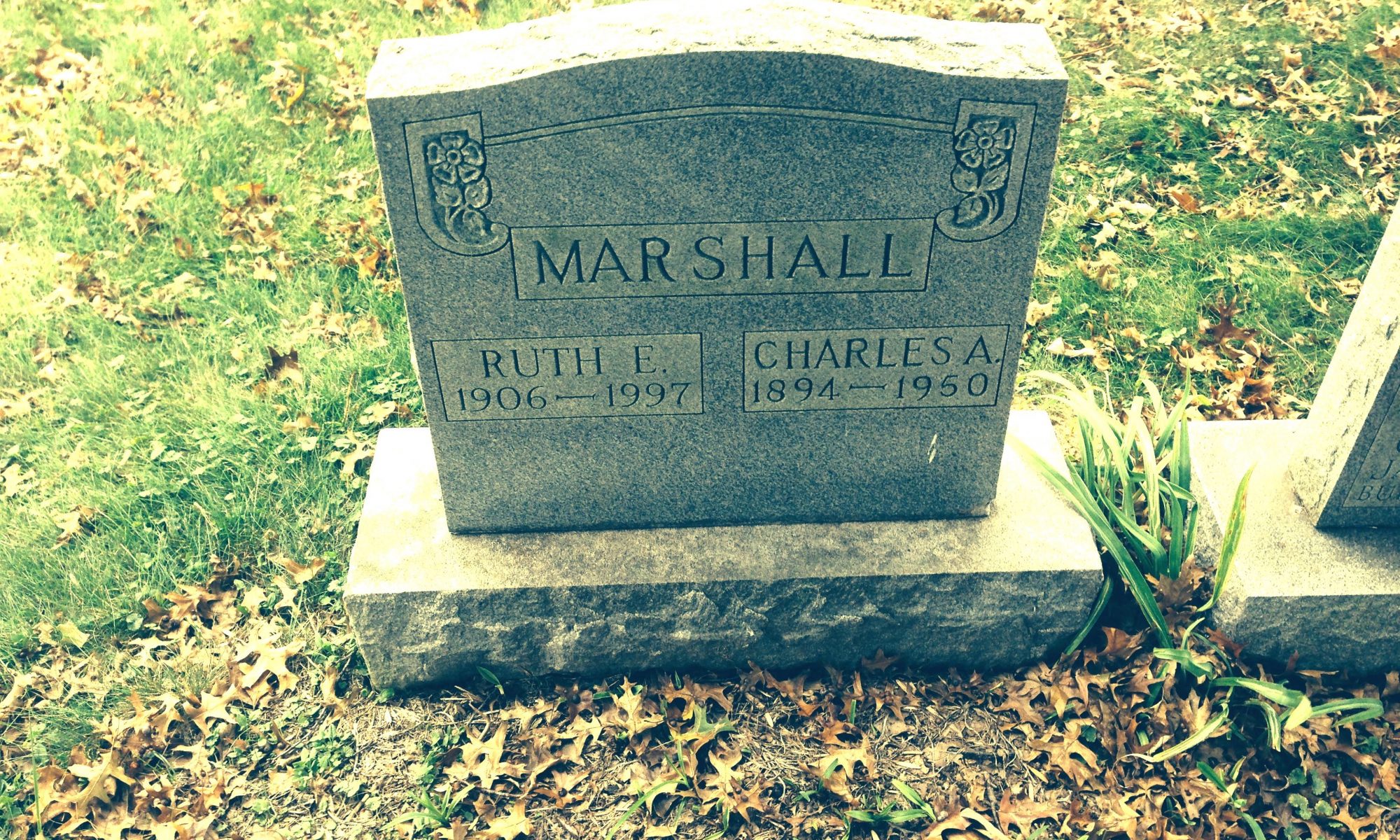 I, Charles W Marshall, am writing this portion of this entry on Feb 28 2019. It contains the oral history I have heard growing up on Walnut Grove Farm. You should understand it may not be accurate. I hope others will review and make entries that correct, extend and clarify the live of step Grandmother Ruth E Marshall Marshall. I knew Mama Ruth only from the perspective of a child for most of my life. She moved from Walnut Grove back to Lexington KY in 1960, when my aunt Linda Ruth (her daughter) graduated from Maysville High School and went to University of Kentucky to college. At that time Mama Ruth started working for the University of Kentucky as one of the ladies who was a receptionist in Homes Hall a freshman girls’ dorm at UK. She continued to live and work in Lexington until her retirement. And even then remained in Lexington until here death in 1997.

Ruth Marshall married my Grandfather Charles A Marshall Sr. shortly after his first wife died of Typhoid. She obviously knew that he had two young sons. Noticing the time between the sudden, tragic death of Julia Marshall, and Charles marriage to Ruth it is apparent there was not much time for a long courtship where great love was built before the wedding. My grandfather had been told by his mother, that it was unseemly for a single man to try to raise two small boys, and that he WOULD get married or she would see that the boys were be taken from his home.

I have no knowledge of how Charles and Ruth met and married. I do know that Ruth truly cared for and loved Charles and Pack, just as she did Linda. It must have required great courage her accept Charles’ proposal of marriage. As described in other entries by this time the Marshall finances had dimmed to the point that Charles would soon be asked to return to Walnut Grove to see if it was possible to save it from forced sale.

See Charles A Marshall Sr entry for further details, but suffice to say the austere. Even with some health issues, of her own Ruth, lovingly contributed to success of raising 2 sons and a daughter, while helping her husband get Walnut Grove out of debt. In there was a substantial balance, on deposit at the bank when Charles died so unexpectedly.

After the hardships of the depression, Ruth gave birth Linda Ruth in 1943. Then her husband dies suddenly in 1950. As told in the discussion in C A Marshall Sr. entry, at Charles Sr death, Mama Ruth became a owner of a 1/4 share of Walnut Grove Farm. Which was then her only source of income.

The 1950’s where a transition from her being the managing tenant of Walnut Grove. Under this arrangement, Charles A Marshall Jr. worked by the hour for the but was allowed to raise some tobacco to wages. Starting in 40’s Charles A Marshall Sr. had transitioned Walnut Grove toward a commercial operation. The expectation had been that the farm would not expect to raise everything it needed. now the plan was for it to produce what it could make a profit on, and buy what it did not produce, with funds from the sold.

In the late 1940s Charles caught the crest of the KY31 Fescue wave. However shortly after the 1951 crop, the price collapsed. There where low barriers to prevent new production and everyone decided that raising KY31 Fescue was the sure way to make a fortune. In fact I was told by Bert Collins, (our local extension agent) that it was a shame Charles Sr died but if he had to die, he did it at exactly the correct time. He told me that there were around 5 farmers who “got in on the ground floor” and that the other 4 had all plowed they excess profit into even bigger and fancier certified seed production facilities. When the price of certified seed crashed, all where out of business by 1960. By 1964 almost all seed production had moved to Oregon because of their weather, and the concentration of seed production infrastructure that area’s large production supported.

Since 1938 when Ben H Marshall died, Walnut Grove had been run as . Its acreage had declined to where no 4 equal parts could be created from it, that would have each been a viable farm. When Charles A Sr died, the surviving partners Tom Marshall, Ben Marshall, Emily Marshall Monley, and Mama Ruth opted to take the surplus cash out of the farming operation themselves a dividend. Thus Walnut Grove did not have capital available, to expand seed operation, and avoided the seed price crash.

So when Ruth was first widowed, she was enjoying the cash flow cushion KY31 Fescue provided. Then faced the significant decline in Walnut Grove cash flow as seed production was phased out. Tobacco and Shorthorn beef cattle were the other significant enterprises on Walnut Grove.

During the , to supplement her income, Mama Ruth worked as the secretary of Maysville’s, First Presbyterian Church.

At first Ruth “kept the Walnut Grove books” wrote checks etc. and my father Charles A Marshall did the day to day work and management on the farm and was paid by getting half the gross of any tobacco he raised. As can be imagined, friction arose between Mama Ruth and my father and mother on

Suffice to say there was friction but everyone knew that all wanted the best for the family and at the base, loved and trusted each other. There were frequent open and frank discussions. (For the next story understand this is what I understood as a first or second grader listening to only one side of the situation). Dad really felt put upon, working on the Shorthorn Cattle. He felt that they really did not make any money in total. He believed Mama Ruth liked them because she got the income, but did not have to raise the hay to feed them or work with the cattle. So dad kept pestering her that the farm should sell the Shorthorns and get out of the beef business. (At this time the Shorthorn bred was fading out in any case and were considered less desirable than Hereford and Angus cattle.) So dad goes over to Mama Ruth’s house (which is, in 2019, my home) and catches Mama Ruth just as she is about to leave for an appointment in Maysville. Well, he starts in on his pitch and she says, “Well I have to go if you think we should, then go on and sell them.” She drives off and dad immediately calls enough trucks to take every Shorthorn animal on Walnut Grove, to the stockyard for sale. When Mama Ruth returned and learned that they were ALL sold, she said “Well I did not think you would take me seriously”, but he did.

One time when field corn was at just the right stage to be corn on the cob, Mama Ruth asked dad to bring her some out of the field, to put up. At that time of the year, he had other projects he was busy with, so he stopped and only brought her a few . Well, she allowed how he was being stingy and certainly should have brought her more than that little bit, because she wanted to “can” some corn for winter. That set dad off and he went back, stopped whatever else he had planned to do, and enough corn to cover a hay wagon’s floor with ears piled 2 deep on it. That was the last time she complained about not getting enough corn to put up.

I have fond memories of sharing holidays with Mama Ruth and Linda especially until they moved to Lexington. Both my Mother and Mama Ruth where great cooks and one never left either of their tables hungry.

Soon after Linda Ruth moved to Lexington, she studied to be a medical secretary. Upon graduation she moved on to Chicago. Chicago was the city where Ruth’s twin sister Margarete lived. Margarete’s husband Forest Cleveland was a full professor at University of Chicago. Soon after arriving in Chicago, Linda Ruth met and married a medical doctor (Robert Cohenour.) In 2019 they live in Southern California.

From when she moved to Walnut Grove Mama Ruth, lived in a white farmhouse on two acres of land deeded out of Walnut Grove farm (see description under C A Marshall Sr.) In 1960 when she moved to Lexington she still maintained the house for her use when she returned to Mason County. In 1978 she sold it to my uncle Paxton Marshall. A few years later my wife Mary Frances and I bought this house from Paxton and still live in it.

After 1960, when Ruth moved to Lexington, this friction decreased but conflicting opinions on the appropriate amount of debt , partner payments, etc. where still cause of some friction. In 1953 Tom Marshall died and Charles A Marshall Jr bought his 1/4 interest in Walnut Grove, thus giving Charles A Marshall Jr standing to participate in the Walnut Grove Meetings and partner profit distributions.

In 1972 Charles A Marshall Jr convinced me (Charles William Marshall) that he and I should buy the 3/4 of Walnut Grove Farm still owned by B.H.Marshall (Uncle Harby), Mama Ruth, and Aunt Emily Monley. We borrowed the funds and did just that. This reduced the friction over Walnut Grove finances and family gatherings where much calmer from then on.

Mama Ruth lived in Lexington’s Lafayette apartments at Woodland and Main, until she sold her home on Walnut Grove to uncle Pack at which time she purchased a home nearby Henery Clay’s home in Lexington.