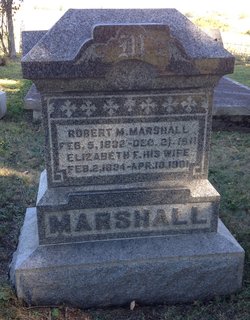 After receiving the instruction of tutors at home, and attending the private school of his uncle, Dr. Louis Mar­shall, Robert graduated at Yale College. He studied law with Hon. Harrison Taylor, in Maysville, Ky., and was licensed in 1853. After practicing for fifteen months in Maysville, he went to Rock Island, Ill., and  practiced for five years s successfully. In 1860, be returned to Mason Co., Ky., and settled on his farm of 600 acres, near Sardis, on the line of Mason and Robertson Counties, where he now lives, and where I visited him in 1884. His natural abilities and finished education make him  an interesting  gentleman. Failing health  is the cause of his giving up the practice of law.

Several pages of further details of the Forman family are happened to this enter in Marshall Family enter, but not included here for brevity

The following taken from the Web site Find-A-Grave

After private instruction at home by tutors, Robert attended first Kenyon College in Ohio and finally Yale University in Connecticut, where he graduated in 1853 with a Bachelor of Laws (L.L.B) degree.

Robert returned home to Ky., became licensed and briefly practiced law in Maysville. Around this time, Robert began courting Miss Elizabeth Forman. In 1855, Robert moved to Rock Island, Ill. where he was to practice law for five years. On a return trip home, Robert married Elizabeth on April 21, 1856. She returned with him to Rock Island. Due to a breakdown in health, Robert moved his growing family back to Kentucky in 1860 to become a farmer.

Robert purchased several hundred acres of land near Sardis in Mason County and began growing tobacco. Robert and Elizabeth spent the rest of their lives in Sardis and raised six surviving sons together: Martin P., a mining speculator who disappeared in Montana in the late 1880s and was never heard from again; Charles, a farmer, who moved to Belknap, Ill; Logan, a farmer, who eventually moved to McAllen, Tex; Robert Jr., a physician who practiced in Colorado, New Mexico and finally Texas; Louis, a physician who practiced in Washington, Ky; and John, a farmer who remained with his parents in Sardis. Robert and Elizabeth also raised two of their grandchildren (children of their son, Charles) for several years after the death of their daughter-in-law.

Elizabeth passed away in 1901 and Robert spent the last ten years of his life living with his son, John. Robert died on December 21, 1911 at his home. He was survived by four sons: Charles Marshall of Belknap, Ill; Logan M. Marshall of Florida; Robert Marshall of Denver, Col; and John Marshall of Sardis, Ky.; four grandchildren; and two sisters: Miss Phoebe Marshall and Mrs. Susan Massie.