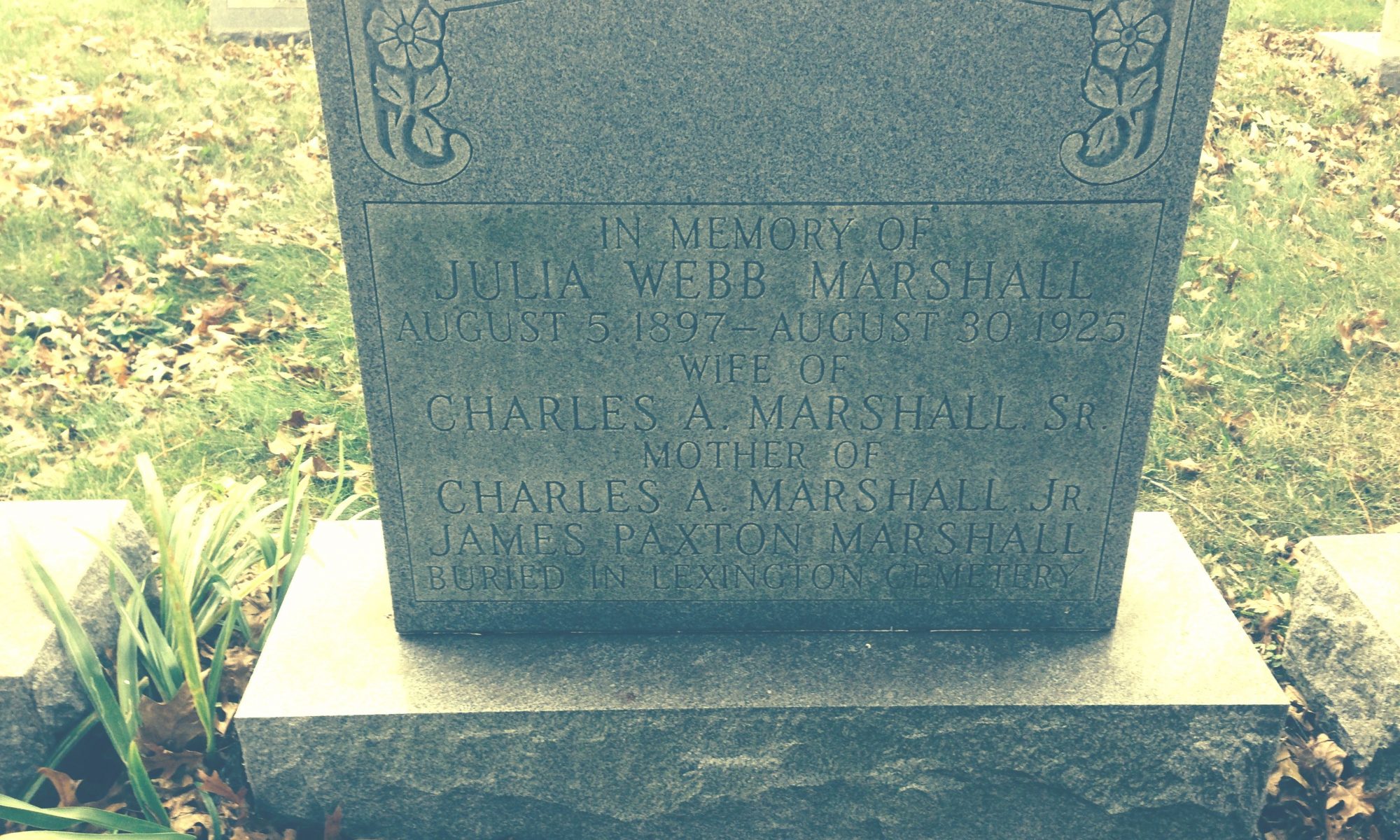 Some of the Information below comes from Ancestry.com

I, Charles W Marshall, am writing this portion of this entry on Mar 1 2019. It contains the oral history I have heard growing up on Walnut Grove Farm. You should understand it may not be accurate. I hope others will review and make entries that correct, extend and clarify the life of my Grandmother Julia Webb Marshall.

By 1897 when Julia was born Richard Webb was a farm manager on Elmendorf farm during its prime, when it was owned by Ben Ali Haggin. I remember C. A. Marshall Jr being very impressed that his mother grew up in a house that had a tennis court.

It was during that 1 year at UK, that Charles A Marshall met and fell in love with his first wife Julia Alma Webb.

Upon leaving UK, Charles was hired by Goodyear Tire and Rubber in Akron OH. After getting established in Akron, he returned back to Northern KY, to marry Julia Webb. I do not know the details but have always heard, they had to be married in N, KY because he had to return to Akron in short order. The Marshall came from Mason County KY, the Webbs brought Julia and the wedding bond from Fayette county. They all met him in Northern KY where Charles and Julia where married on May 26, 1917, the new couple quickly returned to Akron via train.

Julia Alma Webb married Charles Alexander Marshall on May 26, 1917, when she was 19 years old.

Julia and Charles’ son Charles Alexander was born on March 8, 1918, in Akron, Ohio.

In 1920, Julia Alma Webb may have voted for the first time while she was living in Akron, Ohio.

Shortly after Pack’s birth Charles and Julia moved back to Fayette county KY. I believe that Charles Sr. had become unhappy being a very small cog in a very big corporation, In addition it is easy to believe that Julia Webb Marshall would welcome the move back to her hometown

Upon reaching Fayette county Charles and Julia established a garage on the Harrodsburg road at the Forks of the South Elkhorn . This was the era when equipment driven with internal combustion engines was sweeping horses and mules out of use. At this time, almost everyone wanted to switch, but few understood how to service & maintain their new equipment. Charles and Julia’s business was based on Charles ability to profit by supporting all the new equipment arriving on farms in southern Fayette county.

At the same time Julia’s brother was running the “Mammoth Garage” at the intersection of Rose and Main, in downtown Lexington. He held the exclusive right to sell Studebaker cars in the eastern portion of KY. “Mammoth Garage” was his Fayette county Studebaker showroom, plus he operated a bus line from there. That bus line served eastern KY and had routes that extended to Knoxville and other major cities around his service area. It was eventually one of the companies that merged to form Greyhound Bus Line.

All that I have heard, makes me think that the Charles A Marshall Sr family was very happy at the Forks of the South Elkhorn, during this period..

Charles A Jr started school at Picadome Elementary School. It is indicative of Julia Marshall’s personality, and achievement that on Thursday August 27, 1925, in her position as President of the Fayette county Parent Teacher Association), she presided at a county wide PTA meeting. Tragically, she died typhoid fever on Sunday Aug. 30 1925.