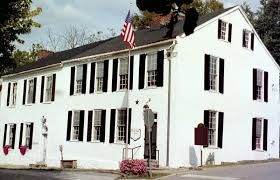 Note: this entry describes the parents of Paxton who wrote the Marshall Family

My grandfather, James Paxton, was killed in Rockbridge Co., Va., shortly after his marriage, by an accidental shot from the gun of a companion, with  whom  he  was hunting.  My father was the only child of the marriage; but  his mother  married  a  Mr.  Moore, removed to southwestern Kentucky, and raised a large family, none of whom I remember ever meeting. (See No. 180e.) When a youth, my father followed his uncle, William McClung, to Kentucky, and lived  for a few  yean near Bardstown.  About 1803, the uncle and nephew came to Mason Co., Ky. Under the instruc­tions of Judge McClung (72), my father pursued a long course of reading and studied law. His learning, as well as his handsome person and brilliant oratory, introduced him into a wide practice. Raised in the Federal school of politics, he became a zealous Whig, nd a sincere Emancipationist.

In 1822, he determined  to sacrifice his well established practice and rear his children upon freesoil. He accordingly removed to Columbus, then a small but rising city,. and was received by the McDowells, and other friends, that had preceded him with open arms. There he started on a professional and political career that would have brought distinction. But my mother died, and his heart and children where  in  Kentucky.

His second wife was a cousin of my mother.    (SeeNo.180.)    He lived but a few months after his second marriage. He died while on  a. visit to Washingtoh, Ky. He was thrown from his buggy at the Blue–Licks, his head struck a log, and he died from some affection of the brain.

I was six years old when my father died. He  wa.s portly six feet high, and weighed 175 pounds. As a lawyer and orato:r he had few  superio:i;s.  An intelligent, genial and  urbane gentleman, he was beloved by a large circle of intimate friends, and was very popular with all  classes.  His commanding military person, as well as his coolness and courage, called him forth in the  Indian Wars; and, a.s aide to Generals Shelby ·and Harrison, he filled his proper place. He was an enthusiastic Mason, and was buried with all the. “pomp and circmnstance” of the Mystic Order.

He lies in the cemetery on the “Hill,” in Washington, and his  broad  slab bears the following legend, written by Dr.Edgar:

“REARED to the memory of James A. Paxton, the son of James Paxton and Phrebe McClung, b. September 13, 1788, in Rockbridge Co., Va., d. October 23, 1825, aged 37 years. No one has fallen a victim to death of more incorruptable integrity. To preeminent talents and at­tainments, he united the social and domestic virtues in  a degree seldom if ever, surpassed by a friend or husband, a father or brother. Though learned and eloquent as a jurist, yet his main attractions were found in his sympathetic heart, his disinterested benevolence, and his moral delicacy  of  sentiment and action.
“His home was the retreat of peace and plenty, where, supporting and supported, polished friends and dear relatives’ met and mingled into bliss.”

My father’s will was made September  11, 1825.  It gives his lands to his executors, with power of sale, in trust for his widow and children. The widow was to have received a child’s  part, but this she would not take from the children, having enough property in her own right. The will appoints his widow and my uncle, James . K. Marshall, his executors. It is witnessed by Marshall Key, Susan McClung, Frances Marshall and John A. McClung.

Note: Entry #244 in Marshall Family – Paxton contains much more info on Paxton ancestors but is not included here.