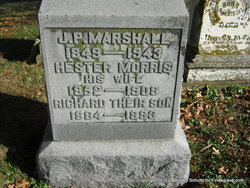 Mr. Marshall was educated for a farmer. After marriage he spent several years on his wife’s native farm in Virginia; and about 1881, returned to Kentucky, and pur­chased a farm adjoining his father’s, where he now resides. Mr.Marshall is an amiable gentleman, and an industrious and successful farmer. His wife is accomplished, and is greatly beloved. They have no children.

These people lived most of their life after Paxton published “Marshall Family”.
I, Charles W. Marshall, am thus adding this entry in 2019. It contains the oral history I have heard growing up on Walnut Grove Farm. You should understand it may not be accurate. I hope others will review and make entries that correct, extend and clarify the life of Paxton Marshall. 1849 – 1943. (Note: I was born in 1949 so never had any actual interaction with with Paxton Marshall 1849 – 1943.)

The “farm adjoining his father’s” lies on the east side and near the North of Key Pike. It was in 1965 a 160 acre plot that we refer to as “Paxton Acres”.

“adjoining his father’s” refers to Walnut Grove, in 1965, a 255 block of land on the west side and near the North end of Key Pike. Walnut Grove is directly across Key Pike from “Paxton Acres”,. (Descendants of Col Thomas Marshall have owned Walnut Grove since the original land grant from Virginia signed by Patrick Henry. As it passed down through the generation it’s size decreased thru land sales and division between each generation’s children.)

I have always heard of “Uncle” Pack, refereed to as kind, sober individual, with good judgement and a kind disposition. I think he, like his brother Ben, engaged tenants, on “shares”, to do most of the actual work on his farm . This type of arrangement assigned him to the “Gentleman Farmer” category.

He was referred to as “Uncle Pack” by my family, because he and Ben H Marshall (my great grand father) where bothers. During the 1930s my father grew up on “Walnut Grove”. It was during this period, that he spoke of “Uncle Pack” regularly coming to ‘Sunday Dinner”. Paxton’s wife, Hester, died in 1908. From then until 1938, when Ben died, these Sunday dinner’s would have been at Ben’s table, in the brick farm house on Walnut Grove. Between 1938 and 1943, he took his Sunday dinner in the wood frame house my Grandfather, Charles A Marshall Sr., built in 1929. (Which is where I live in 2019 and where I am writing this entry)

Mr daughter, Julia Elizabeth Marshall, is now using the dinner table at which these Sunday dinners occurred. In the late 1970’s my wife had it refinished when she and I “set up housekeeping”, after our 1978 marriage. The table looked great, when she went to pick it up. The shop owner said “I did not do anything the underneath. There are some strange marks at one seat. I thought you might want to save them”. When my father, Charles A Marshall Jr., heard that, he said “Oh that is where Uncle Pack sat when he came to “Sunday Dinner”. After the meal he would reach strike his wooden match on the underside of the table. He would then light his cigar or pipe. Only then would he enter into the after meal discussion.

Almost immediately after Charles A Marshall Sr (son of Ben H Marshall) returned to Walnut Grove farm, in 1929, the depression hit and times became very tough. My father Charles A Marshall Jr. told how, during the early 30’s, Uncle Paxton gave the Walnut Grove Marshalls, a 1 cylinder gasoline engine. This engine allowed them to power a small hammer mill. That mill let them grind their own grain for livestock feed. This gift was remembered as making a substantial contribution, toward allowing the Ben H Marshall line to survive the depression with ownership of Walnut Grove intact. Charles A Marshall Jr. told me, Paxton asked for nothing in return. Dad simply said the motor gift, was indicative of the love and support Paxton Marshall felt for his Marshall family members.

Below shows the relationship of Paxton and Ben Marshall