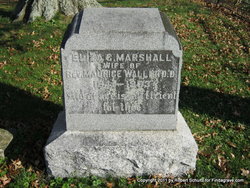 Lizzie is a  tall, handsome and  accomplished  lady.  Her letters  to  me show the abil­ity  and  style of one highly  accomplished.      Rev. Mr. Waller  had his literary education at Center College, Kentucky, and was graduated in 1864, at the Theological Seminary of the Northwest, at Chicago.

On account of ill health, he did not preach for several yea.rs. From 1867 to 1872, he preached to the Presbyterian Church at Hancock, Ind. From 1872 to 1878, he was pastor of the church at Peters­burg, IL. From 1878 to 1880, he preached at Helena, Ark. He became in 1880, pastor of the Presbyterian Church at Manchester, Ohio, where he  is now preaching.  He is an earnest and successful preacher – as a learned theologian, and as an able ecclesiastic, he stands high with his brethren. Mr. WaIler is a son of Hon. Henry Waller, of Chicago, and Sarah Bell Langhorne, who were married May 3, 1837. Mrs. S. B. Waller  died in  1883,  in Chicago.

Marshall Family by Paxton include s more information on the Waller and Langhorne Families, but not included here for brevity

The following Obit. of Rev.  Maurice Waller taken from the Web site Find-A-Grave

Many Attend The Funeral of the Late Dr. Maurice Waller, Who Died at the Home of His Sister in Chicago, Ill., Tuesday—Buried in Maysville Cemetery.

The funeral of Dr. Maurice Waller was held in the First Presbyterian Church yesterday afternoon, the body of the beloved minister having arrived at 10 o’clock in the morning.

The burial was made in the Maysville cemetery.

A large number of the friends and admirers of Dr. Waller gathered at the church to pay a silent but personal tribute to his life. Huge banks of flowers told mutely the esteem in which he was held and though the audience was composed almost entirely of the older residents of the city and county it showed that his good was not to be interred with his bones.

Dr. John Barbour, pastor of the First Presbyterian Church, assisted by Rev. H. Kerr Taylor of the Central Presbyterian Church and Rev. Emil Bauerman of Flemingsburg, conducted the funeral ceremony Dr. Barbour paid a splendid tribute to the life of Dr. Waller, his connection with the old First Church and spoke earnestly of his Christian life and his work for his Master.

The pallbearers were Messrs. Paxton Marshall, Ben Marshall, John Chambers, Frank Ellison, J. Foster Barbour and R. A. Cochran. During the removal of the body from the church the bell tolled in respect to the dead. A quartet composed of Miss Mary Wilson, Mr. and Mrs. J. Foster Barbour and Mr. R. A. Cochran rendered two beautiful hymns. The interment was made in the Maysville Cemetery. A short service at the grave was conducted by Dr. Barbour.