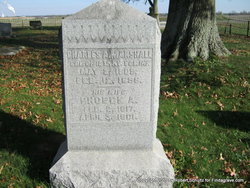 Family Tree Including Children who lived to Adulthood

Col. Marshall was educated at ” Buckpond,” at the private school of his uncle, Dr. Louis Marshall. Under the tutelage of his father and older sisters, he read at home history, philosophy and belles letters.

After marriage he purchased ” Walnut  Grove ”  of the  descendants of his wife’s grandfather, A. K. Marshall  (68);  and  here he has spent his useful life, in the quiet pursuit.& of agriculture.  His home has long been the center of refinement, literature and religion. Be­neath his hospitable roof I have always found a welcome and gen­erous entertainment. Ten years  my senior,  I  have always found Col. Marshall a wise counsellor and a powerful protector.  Of tall and ungainly person, his bodily activity, mental power and moral Courage give him even yet a commanding influence.               His boiling Kennan blood is assuaged by Marshall pride, sober thought, and the curtain lectures of his good wife. By nature, a “rough ashier,” his wide experience, social culture and extensive reading, have polished him into brilliant marble. I have seldom  met with one better versed in English and American history, and  the  politics and literature of the day. His  associates  have been  the leading  men of  Kentucky. He is liberal in his views, and _takes a lively interest in every reform. Mr. Marshall has been successively a Whig, American and Dem­ocrat. He represented Mason Co., Ky., in the State Legislature in 1840 and 1855-1859.

When the war broke out he was a decided Union man, and opposed secession with all his powers. Though too old for active service, his energy and influence caused him to be se­lected to raise a regiment of  infantry  in  Northern Kentucky.  He had hardly commenced the work of enlistment before he was ordered to join Gen. Nelson in the mountains of Eastern Kentucky.

On the 19th of October, 1861, he  started  with 350 men.  On the march of Nelson’s brigade up the Big Sandy, Marshall was placed in the advance. Scout.& were thrown out, but Nelson demanded more haste. Col. Marshall pressed forward rapidly, and suddenly found himself attacked by the enemy. His men were in a  narrow  defile, with the  river on one side, and  the bluff upon  the other.    A deadly fire was poured on him from the bluffs in front, and from the oppo­site side of the river. The men were ordered under cover  of  the rocks, and for an hour an equal battle raged. Col. Marshall’s horse was killed under him, and his cap and clothing were perforated with balls. The combatant.& suffered about equal loss. When reinforcements appeared on the bluffs, the enemy fled. Having accomp­lished their purpose the brigade returned. The Sixteenth Kentucky was completed, and did  signal  service  in  the war.    But  Col. Marshall found that age and rheumatism unfitted him for service, and he resigned.

Col. Marshall’s wife is my sister. Bright, merry and joyous in her youth, she is yet full of life, energy and enterprise. She rules her own department, which extends over house, yard and garden. No one has earlier vegetables, or more beautiful or rare flowers. Her hearty welcome and large and cordial hospitality, have made “Walnut Grove,” with its antique and aristocratic surroundings, a favorite resort for a large circle of friends.

My sister, in early life, joined the Presbyterian Church, and. years afterward, her husband followed her to the house of God. He has long been an elder, and a zealous supporter of the church. A family altar is erected, and the voice of prayer is daily heard at the evening sacrifice.

Note: the Paxton book continues with poems ono page 134 written by {Paxtoon about Col Chas A Marshall and his sister, should you care to review them.

I, Charles W Marshall, am writing this portion of this entry on Mar 2 2019. It contains the oral history I have heard growing up on Walnut Grove Farm. You should understand it may not be accurate. I hope others will review and make entries that correct, extend and clarify the life of Col Charles A Marshall. They are folks we current Marshalls have heard about, all our lives, but never met in person.

Col Charles Marshall was far enough back in time the truthfully I only heard of one story about him that is not covered by Paxton and recounted above.

It seems that after the civil war friends and neighbors would approach Col Marshall for cash loans. It reached the point where Col. Marshall, did not have cash to loan. He adopted the habit of co signing their loans, (ie guaranteeing that he would pay a debt if his trusted friend, the primary borrower, did not). In the panic of 1893, there was a run on cash. Banks called all the loans, he had co signed, at the same time. He was forced to sell part of Walnut Grove (at the bottom of the crash) to cover the debt he had guaranteed payment on. The land lies on the west side of Key Pike and is currently owned by our good neighbors, the Hubers and Schumachers. Multiple times when we would pass this land C A Marshall Jr. would remind me that, if someone you trust wants to borrow money and you have cash available, then loan it to them, but NEVER co-sign.