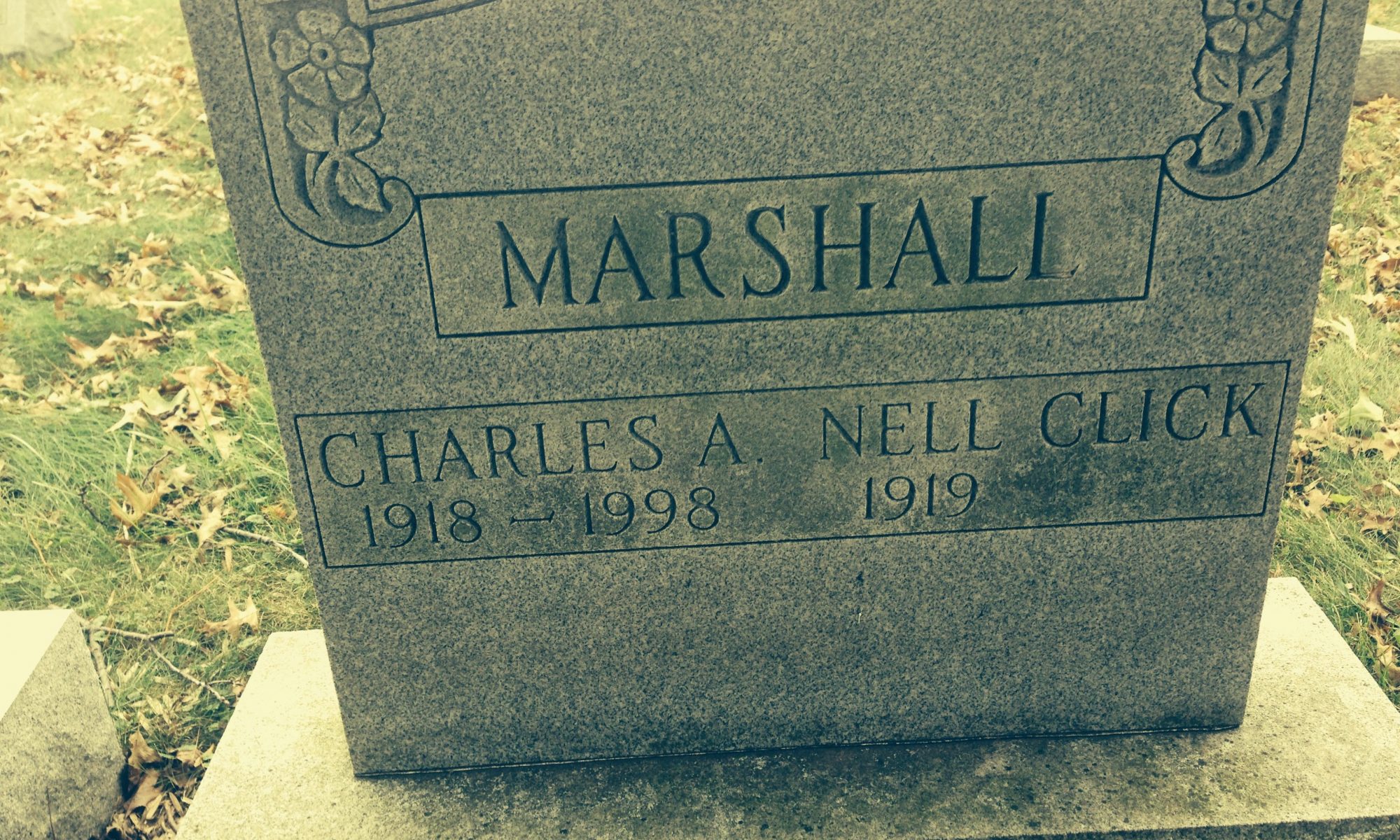 I, Charles W Marshall, am writing this portion of this entry on Mar 2, 2019. It contains the oral history I have heard growing up on Walnut Grove Farm. You should understand it may not be accurate. I hope others will review and make entries that correct, extend and clarify the life of Nell Jones Marshall.

Some of this information comes from Ancestery.com

Nell Jones Click was born on August 16, 1919, in Wayne, West Virginia, to Nell Ross Kirkpatrick, age 30who graduated from Maryville College in Maryville TN, and William Daniel Click, age 30 who was a graduate of Berea College and employed as USDA Agricultural Extension Agent for Wayne County WV.

Nell Jones Click lived in Huntington, West Virginia, in 1935. because W D Click have been transferred by USDA to serve as Cabell county Agricultural Extension Agent. Nell Jo attended Miller Elementary in Huntington. She was a graduate of Huntington High School in 1937, attended Marshall University in Huntington, and graduated from Berea College in 1941.

Nell Jones Click lived in Berea, Kentucky, in 1941 while attending Berea College. Upon graduation she accepted a job as USDA Home Economist in Greenup KY.

Nell Jones Click married Charles Alexander Marshall in Cabell, West Virginia, on January 3, 1948, when she was 28 years old  he was 29 years old.

Charles Jr and Nell Jo’s only child Charles William was born on August 8, 1949, in Maysville, Kentucky.

When Charles W started first grade in 1956, Nell Jo taught high school Home Economics in Minerva KY. The next year she transferred to teaching high school Home Economics in Maysville KY. A few years later she transferred to teaching high school Home Economics in Ripley OH. When her father died in 1960, she stopped teaching, while she settled his affairs in Huntington. After that she only acted as a substitute teacher occasionally, until the 66/67 school year, when she taught in one of Mason County’s first attempts to have a classroom dedicated to special needs students. She had to many students and to few aids for the situation. She found her in-ability to serve the real need of these students, to be quite troubling. She did not teach school after that experience.

Her husband Charles Alexander passed away on November 15, 1998, in Maysville, Kentucky, at the age of 80. Due to dementia he had been unable to talk for his last 5 year. They had been married 50 years.

Nell Jo loved her church, First Presbyterian, and considered its congregation an extension of her family. During the 68 years that she made Maysville her home she was active in the Daughters of the American Revolution, Colonial Dames, Bluegrass Home Economists, the Mason County Genealogical Society, the YMCA and the American Association of University Women.