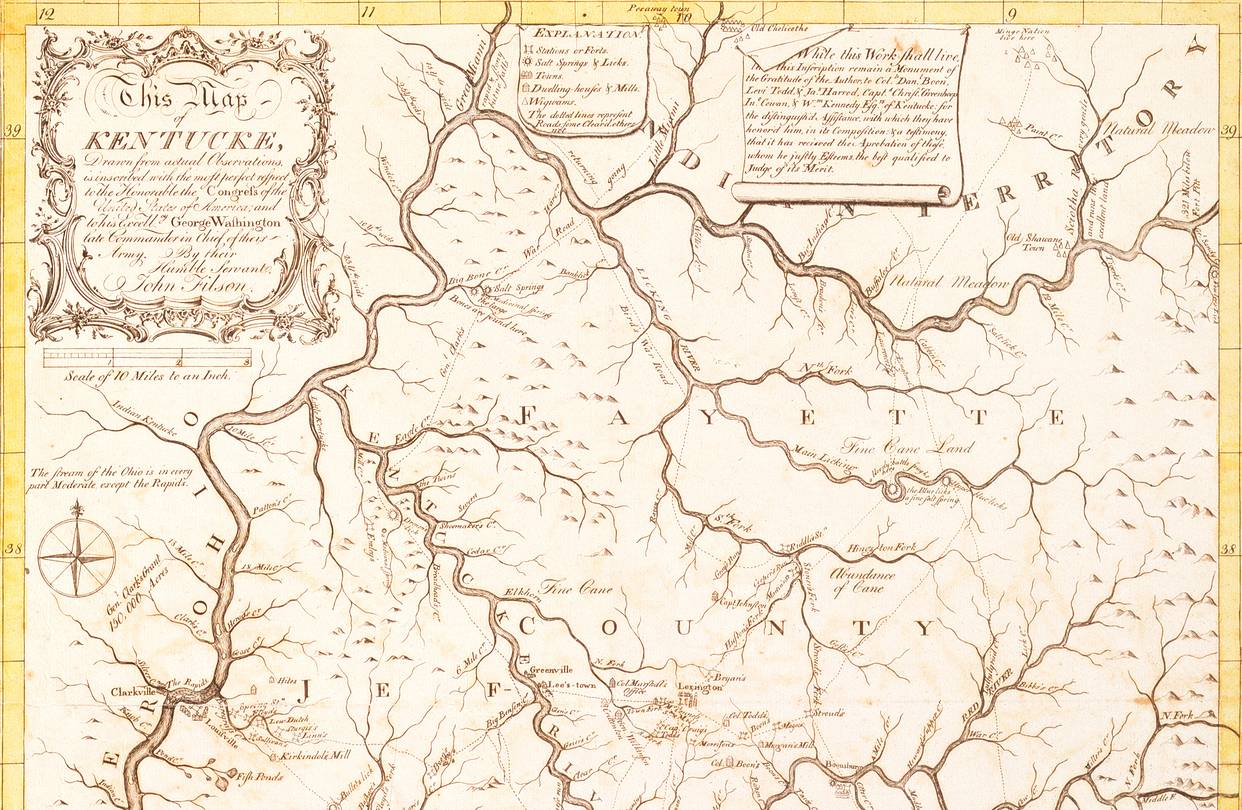 About the year 1780, Col. Marshall was appointed· Surveyor­ General of the lands in Kentucky, appropriated to the officers and soldiers of the Virginia State line. The whole territory consisted of but one county, known as the County of Kentucky. Nov. 1, 1781 it was divided into three counties-Fayette, Lincoln and Jefferson,’ and Col. Marshall was made Surveyor of the first. His name appears among the purchases of lots in Lexington, in 1783.

b 1785, Col. Marshall returned to Virginia for his family, which he brought west on a flatboat, down the Ohio river. McClung in his “Western Adventure,” details the incidents of this trip; which was attended with no trouble, though the voyagers were warned by James Girty, the renegade, of the danger of being decoyed ashore.

In 1787, Col. Marshall represented Fayette County in the Vir­ginia Legislature, in 1788 was elected to the Danville Convention, to form a State Constitution. He was a zealous Federalist, took an active part in the politics of the day, and was decided in his opposition to the scheme of separating Kentucky from the Eastern States.

( e) In 1795, one of bis favorite daughters, Lucy Ambler, died at Jamestown, VA. He was deeply affected by this event, and in a letter to his son, John Marshall, dated Buckpond, Ky., Nov. 6, 1795, he pours forth his sorrows. It shows that, at that time, he held the Office of Collector of United States revenue revenue for the State. He writes:

“The death of our dear Lucy is a heavy affliction-perhaps the more so on account of its being the first of the kind which has been felt by your mother and myself. I endeavor to forget it. I have not mentioned her name twice since your letter announced the unfortunate event. But alas, I frequently find myself sighing and moaning on account of her death, without realizing what I am grieving for. But why am I describing my affliction to you who must have felt the same more than once in all its bitterness. God send we feel it no more ! Your sister Molly [Mrs.Humphrey Marshall], who had a long fit of illness, I believe knows nothing of our loss as yet. We were afraid to make it known to her. Make our kindest compliments of condolence to Mr. Ambler. I feel for him sensibly, and make not the least doubt but he has his share of the affliction; but no person’s can be equal to that of an affectionate father and mother, for the loss of a daughter who never till now was the cause of one painful sensation in the breast of either. Tell Mr. Ambler that we have the firmest confidence in his parental tenderness for the little son, the dear deceased has left with him. Tell him above all to be careful of its health and education – to be careful to sow the seed of virtue and honor early in its breast- to make it virtuous rather than learned, if he can’t make it both. That part of what fortune I possess, which I intended for her, I shall leave to him; rather as acknowledgement of parental love and affection, than as an addition to his estate.

f) We are informed that you are appointed Attorney General for the United States, and that you have accepted the office. Now I hope we may be informed why we have no Attorney in this State for the United States. I have complained of this in every letter I have written on the subject of revenue. I cannot possibly have the revenue collected, as no one will comply with the laws without compulsion, and the government has not put it in my power to compel compliance. This I have tried, but without success. What I can do, I know not. I should think that in the present situation of affairs there might be political reasons assigned for the neglect. But if that be the case, why am I repeatedly written to by the Commissioner of Revenue, as if it was expected that I could go on with the business in the same manner as if there were no impediment, etc.