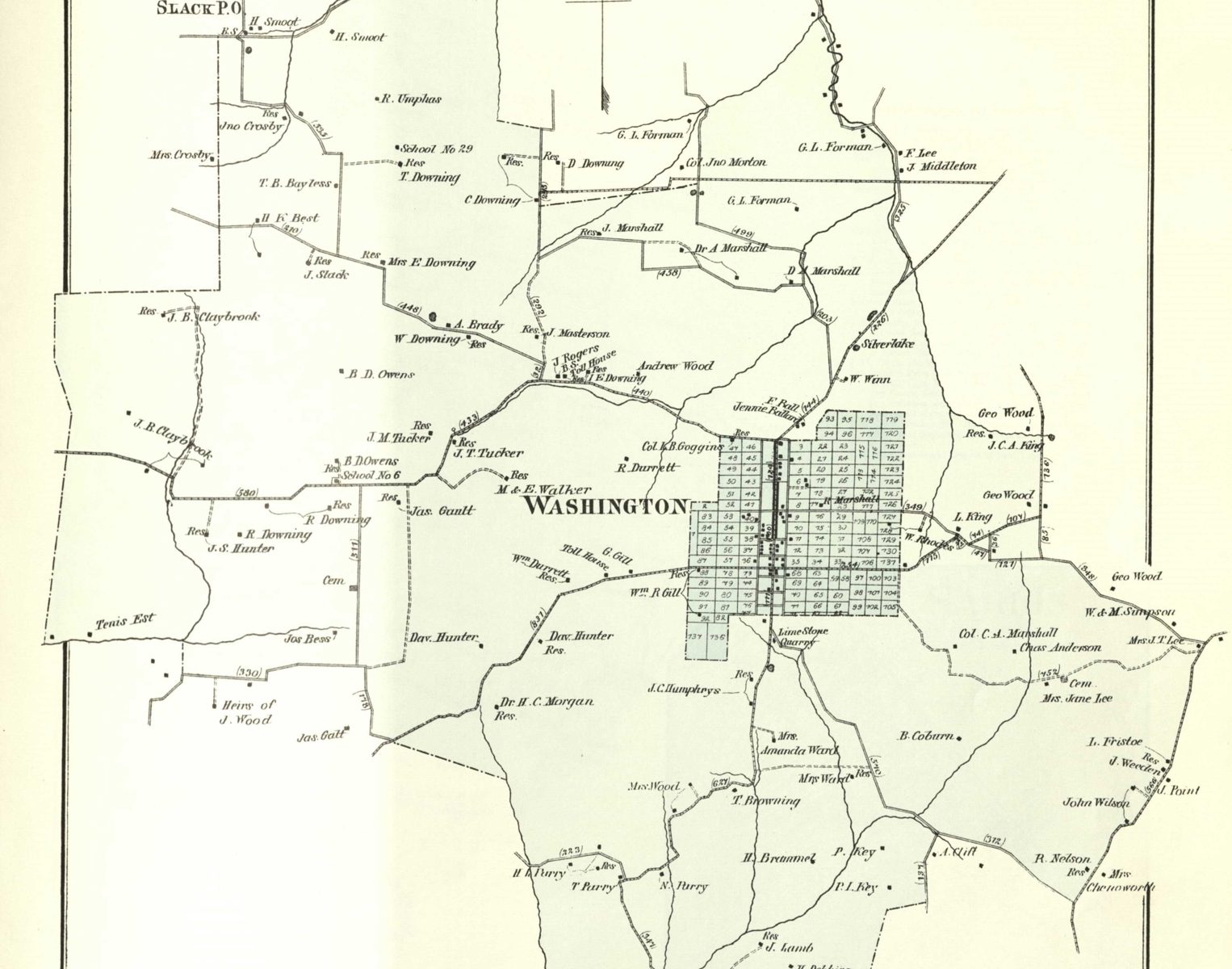 At the age of seventeen he volunteered as a private in his father’s regiment, and served until the close of the Revolutionary war, at which time he held the commission of a Captain. He saw hard service, and participated in many of the bloody battles of the war of Independence.

Capt. Marshall spent several years on his farm in Fauquier. In the fall of 1788, or the spring of 1789, he came to Kentucky The following letter, dated June 14, 1789, without postmark, is directed to his cousin and brothers–in-law, Thomas Smith (32). It shows that he was in Kentucky at its date, and its reference  to his grain, not yet thrashed, indicates bis departure from Virginia was but a few months earlier.

(d)    Capt Marshall, as he promised in the above letter, re­turned to Virginia in the fall of 1789, and in the spring of 1790, we find him descending the Ohio to Maysville, in a flatboat. See 2d Collins, Ky., 569-71. His adventure with the Indians,  and  his almost miraculous escape, is recorded by McClung in his ” Western Adventure.”

Shortly after Capt.  Marshall’s arrival, he  was married to Miss Fanny M. Kennan. His first residence was on Clark’s Run, four miles west of Washington. Here he built a fine log house, with substantial stone chimneys. In the old cupboard he kept the county records for a time. In this old house my childhood was passed, and it was still standing when I last  visited it in 1872.

Capt. Marshall was the first clerk of Mason County, and was, perhaps, still in office when he died in 1817. He was a member of the convention that formed the first constitution of Kentucky.

His father, Col. Thomas Marshall, left “Buckpond” in 1800,  and  came to Mason to live with his son Thomas. Capt. Marshall had, I think, moved into Washington as early as 1795, and  built a frame house on what was, and is, known as “The Hill.” But when Col. Marshall came to Washington in 1800, he assisted his son in the erection of the spacious brick mansion, which is still the Marshall homestead.

Here, Capt. Marshall, for seventeen years, dispensed his noble char­ities. Here, “Aunt Fanny,” during the sixteen years of her widowhood, entertained  her  relatives with  profuse hospitality,  and Judge J. J. Key,  Dr. J.  A. McClung and Martin P. Marshall made the old residence a home for all who were of their blood. It was sometimes called the “Federal Hill,” on account of the political proclivities of Capt. Marshall and his chosen friends. The following letter of Capt. Marshall to his first wife’s niece will interest his posterity. It is directed to Mrs. Susanna Morgan, Oakhill, Fauquier Co., Va.,­ by the hands of H. W.Barnett, and dated October 12, 1810:

DEAR SUSAN: After a silence of all my friends and acquaintances for nearly twenty years, I was sometime ago agreeably surprised by the receipt of a letter from you, which showed I was not entirely forgotten by the whole of you. But your letter, agreeable and interest­ing as it was to me, might have been rendered much more so if you had gone more into family details. Things that to you, on the spot, who see them as they pass, appear of no consequence, to a friend at a distance, who still feels a strong interest in your welfare, things which appear to you as nothing, are of consequence to me. I wish to hear how each of your brothers and sisters are settled, and what they  are  about- how your mother is doing, and everything relating to all my friends and rel­atives in your quarter, for I still look upon you  all, and  feel that  you are all my relatives. I am now growing old fat  and clumsy, with a  house full of children, and  am very sure shall never go to your county again and feel angry and hurt at any one’s coming to this country without calling on me. I was informed sometime ago, that Jo. Chilton passed through this place without calling on me. I was much surprised. at it, as I live in town, and it hurt me very much. Don’t expect to have regular answers to your letters from an  old  fellow like me;  but don’t let that prevent you from writing, as I really receive a great pleasure from finding myself st.ill remembered by you. I always feel an interest in the welfare of the people of that part of the world, where I have spent so many of my happy, as well as unhappy hours. I still look upon my­ self as your uncle, and therefore shall subscribe myself as your uncle, T Marshall

(J) Aunt Fanny was a short, stout woman, and full of life and energy. She gathered into her large drawing-room the intelligent, the beautiful  and  the chivalrous  of  the West.  Many interesting and memorable events transpired under her roof, and make her a historic character. In my early days, when homeless and parent­ less, I found a welcome and motherly attention on “The Hill.” Though  Aunt  Fanny’s temper  was  terrible in threats, she seldom struck a blow. When I would steal her preserves, her short, heavy form  would  rise on tiptoe, her head would shake, and her trembling forefinger would point upon my crouching figure, and wrath and threats would pour as a river; and the next moment the poor orphan child would be led to her larder and treated to delicacies. Her table was prodigal in its abundance, and the more company she had the better she was satisfied. Capt. and Mrs. Marshall lie side by eide in the “Hill” cemetery. His epitaph reads:

(g) Thomas Marshall, son of Thomas and Mary Marshall; was born the 27th of October 1761, and after serving his friends, his family, his country and him self, departed this life the 19th day of :March, 1817. To all, especially to the widows and orphans of the poor, to one as a friend, and to the other as a benefactor; To his memory his affectionate widow and children have constructed this monument.

Aunt Fanny was raised  an Episcopalian, was  somewhat  in­clined to the Baptists, but joined the Presbyterian Church,  that she might be with  her friends. She joined the church in 1818, and from that day her house was the home of all Presbyterian minisers.

Erected to the memory of Mrs. Frances Marshall, who died Novem­ber 19, 1833, in the 61st year of her age. During the vicissitudes of a long life, chequered, as is the lot of humanity, with much of happiness and more of sorrow, the character of the deceased remained the same. An affectionate wife, a fond mother1an humble but ardent Christian, a warm-hearted and devoted friend, sne will long be remembered in that extensive circle of friends and relatives who, for many years met at her hospitable board, and  to whom her  house was a home.  In the bosom of that numerous connection, who had known her worth and shared her aflection, she expired calmly, cheerfully, happily, in the full hope of a joyful resurrection.

(k) William Kennan married a Gardener, and they had four children: ‘